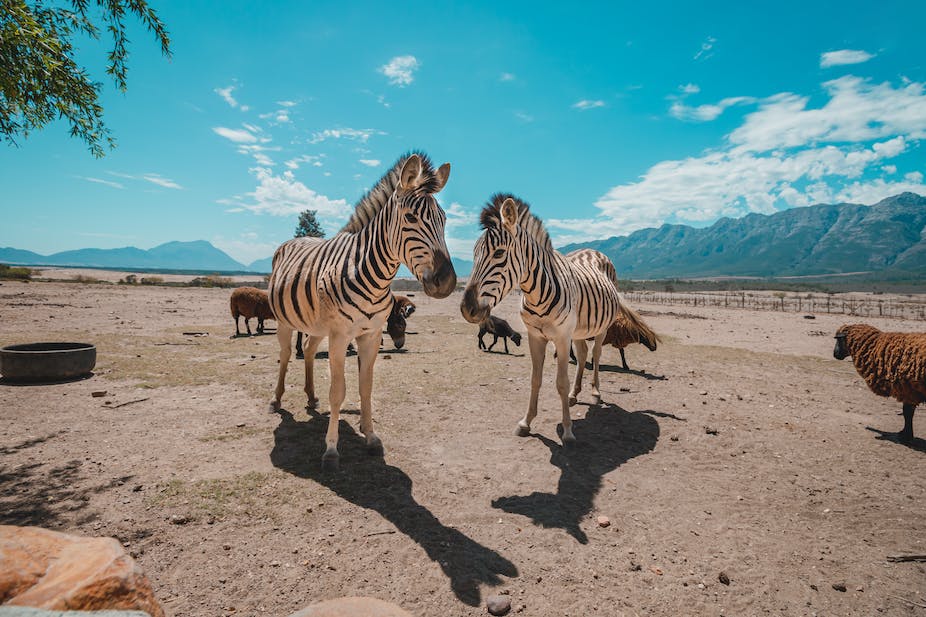 Zebras stand in a ranch in South Africa. Francois Louw/Shutterstock

Designated protected areas for wildlife – such as national parks – are the world’s principal conservation strategy. But this model to conserve wildlife in Africa is increasingly coming under pressure. Changing climates, volatile economies and political systems, conflicting sentiments around wildlife management practices (like trophy hunting) and unpredictable events, such as pandemics, are just some of the threats that undermine conservation efforts.

Many protected areas didn’t fare well during the pandemic, particularly across Africa. Ailing economies and restricted travel reduced the funding and tourism revenues on which many parks depend. As a result, half of surveyed parks across 19 African countries reported reductions in the protection of endangered species, field patrols and anti-poaching measures.

These impacts bring into question the resilience of protected areas where conservation is funded by donations, state budgets and, in some cases, ecotourism. Additional conservation models are called for.

One such model is wildlife ranching. We carried out a study which examined how wildlife ranches in South Africa responded to the impact of the pandemic. There are different types of wildlife ranches. They generate revenue from wildlife through a variety of activities including ecotourism, trophy and meat hunting, wildlife trade and meat sales. On some of these ranches, livestock shared space with wildlife.

Some specialised in one or two of these activities, others had a more diverse income portfolio. We found that, on average, wildlife ranches were more financially resilient and better able to adapt to the impact of the pandemic than protected areas. Importantly, ranches with mixed systems of wildlife and livestock coped the best.

We can learn from these wildlife ranches – and their adaptable business models – to build more resilient conservation systems in an increasingly volatile world.

Wildlife ranches as a conservation model

In several southern African countries – including South Africa, Namibia, Botswana, Zimbabwe and Zambia – private landholders and communities are involved in conservation through various models which aim to benefit local people and wildlife. One of these is wildlife ranching.

In South Africa, privately owned wildlife ranches span an estimated 17% of the land, over double that of protected areas. They play a major role in conserving South Africa’s wildlife, including iconic species such as white rhinos. An estimated 5 to 7 million herbivores occur on ranches nationally.

On these ranches, wildlife is used to generate livelihoods. Conservation is an outcome rather than a primary objective.

The COVID pandemic presented an opportunity to understand how a major global shock affected the ranches.

They found that wildlife ranches that specialised in ecotourism, particularly international tourism, were the worst financially affected by the pandemic. Three in every four ranches lost more than 75% of their revenues.

Ranches that specialised in trophy hunting, similarly dependent on international clientele, also commonly lost more than 75% of their revenues.

By contrast, ranches that generated revenues from a more diverse portfolio of wildlife-based activities before the crisis fared better. Only one in every four ranches lost more than 75% of their revenues. Their activities included wildlife sales, meat sales or meat hunting, often alongside international hunting or ecotourism.

Notably, wildlife ranches that also practised livestock farming suffered the least impact. Some even increased their revenues during the pandemic.

Coping during the pandemic

What was surprising is that cost cutting wasn’t the most common response. Far more common (40% of ranchers) was to shift strategies towards attracting local tourists or meat hunters, often by offering discounted rates.

Ranchers also commonly shifted their revenue generation to other activities, beyond hunting and ecotourism. These included packaging and selling wildlife meat, or farming livestock.

All ecotourism-focused ranches reported cutting costs. None shifted to livestock and very few shifted to other wildlife-based activities.

By contrast, only a third of ranches undertaking more diverse wildlife activities cut costs. The majority scaled up live wildlife sales or meat packaging and processing.

This tells us that it is easier for a rancher to scale up an activity that they were already doing to compensate for the loss of another, than it is to start something new.

Lessons in a changing world

Many wildlife ranches demonstrated the ability to adapt in the face of a major global shock. While the significant impact of the pandemic on their revenues must not be overlooked, lessons can be learned from the ways in which these enterprises coped with the crisis.

While conservation models based on international visitors (like ecotourism and trophy hunting) can be lucrative activities in normal times, building resilience requires diversifying revenue streams.

Diversification of revenue streams depends on policies that provide landholders with the right to use wildlife. These rights vary across African countries. In Namibia, for example, communities can benefit from both ecotourism and hunting on their land, while in Kenya trophy hunting is prohibited.

More conventional conservation models – such as national parks – are important for national identity, heritage and conservation. They can survive crises through an injection of state funds. However, they are often expensive for national treasuries. They’re also rigid, both institutionally and in what the public finds acceptable. For example, it is usually expected that they are “wilderness places” where revenue-generation is at best a secondary objective to conservation, and often limited to ecotourism. With diminishing state budgets, many parks are nevertheless increasingly dependent on these revenues to fund their management.

South Africa’s national parks cover almost three-quarters of their operational costs through tourism, yet lost 90% of this revenue during the 2020 lockdown. This prompted the call for more diversified income streams going forward.

While we highlight the importance of the greater adaptive capacity seen on wildlife ranches, compared with that of parks, we also recognise that not all adaptations will be good for conservation. For example, reducing anti-poaching measures to cut costs is not ideal, and the longer-term conservation implications of scaling up livestock production should be monitored. It may enhance ecosystem functioning in some contexts.

Ultimately, we need both traditional conservation tools like national parks and more pluralistic and adaptable approaches like wildlife ranches to ensure resilience of our natural heritage in times of change. Importantly, wildlife ranches should not be seen as, or measured as, protected areas. They are working lands and require different policy instruments and incentives.

Governments could create enabling environments for more diverse land uses that include wildlife-based models to thrive, such as access to land and tenure security, avoiding over-regulation, and increasing skills development programmes for managing both wildlife and livestock simultaneously.

This article was co-authored by Hayley Clements and was first published on The Conversation on October 26, 2022.