Automobility, the overarching system that maintains global automobile dependence, is a quintessential illustration of the twentieth century taking its revenge on the twenty-first (Dennis & Urry 2009).  The reliance on private cars as dominant mode of transport is having significant social, environmental and economic impacts on societies and hindering the global quest for sustainability.  The research draws on sustainable transition theory, current city thinking and sustainable transport literature to explore alternative transitions for a local manifestation of automobile dependence. The South Peninsula (known as the Far South) is an isolated enclave in Cape Town, characterised by areas of spectacular natural beauty, yet constrained in terms of urban expansion and accessiblity given the mountainous terrain and areas of protected biodiversity.  The transport challenges are consequently plentiful and social dynamics around increased development pressure and basic service delivery needs are tense.

The research followed a participatory approach in conducting a transdisciplinary inquiry exploring potential short-term solutions to everyday reliance on the car. It included a pluralistic methodological approach combining a variety of research methods including the case study method (Yin 2009), netnography to study societal behaviour on a purposive social media group (Kozinets 2010) and a theoretical thematic analysis to reflect on the application of a transition theory framework, the multi-level perspective (Geels 2002). In support of transdisciplinary research (Hadorn, Pohl, Hoffmann-Riem, Biber-Klemm, Wiesmann, Grossenbacher-Mansuy, Zemp & Joye 2008; Brown, Harris & Russell 2010; Pohl 2010), key findings are grouped into potential societal and scientific contributions.  Although a transition to a sustainable alternative to automobility in this enclave seems elusive, given various stabilising landscape and regime factors, the research uncovered an interest for bottom-up societal solutions such as a need for a local school bus and modern carpooling systems based on mobile phone technology. On the other hand, the research supports a critique of the multi-level perspective in showing that physical space (isolated enclave) and relational space (shared beliefs and perceptions) are major factors that sustains inaction on the part of local residents and authorities situated across geographic and institutional scales. 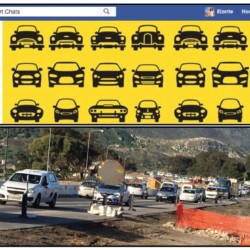