In November 2016, researchers from the Center for Complex Systems in Transition (CST) and the Southern Africa Food Lab (SAFL) conducted a 4-day Transformation Lab (t-lab) event, bringing together a diverse group of actors from the alternative food sector, such as restaurateurs and chefs, producers and informal food traders. A learning journey into the local area and informal conversations connected participants to the space and to each other, and the t-lab quickly became a platform for personal stories and discussions about food culture, alternative food systems in a South African context, and challenges of being small-scale. Actors were provoked with the dominant food system and worked in groups to envision a more sustainable and ideal food future, and through facilitated discussions navigated some difficult conversations about trust, identity and race. At the end of the workshop, the actors agreed on several action points as improvements to their work or collaborations with each other.

The research is a follow up study on the impact relationships and collaborative efforts have on their work as alternative food actors, by focusing on questions such as “what is the story of these actors (before and) after the intervention?” and “Can characteristics such as relationship and collaboration, transform the way that food is produced, processed, distributed, and consumed?” These findings help us understand the effect of T-labs over a longer-term study and provides insights into a novel way of engaging with the complexity of the food system that results in action, from a Global South perspective. 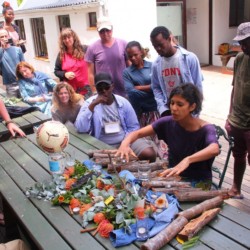