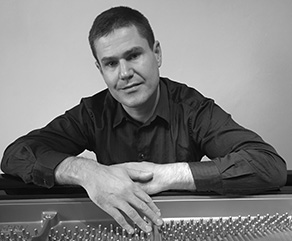 Pieter Grobler is a Senior Lecturer in Piano at Stellenbosch University. In addition to lecturing piano performance, chamber music, accompaniment and repertoire studies he is currently the coordinator for chamber music studies. He was previously the head of practical music studies (2012-17) and department head (2017-19).  Postgraduate supervision has centred around repertoire and pedagogy studies. He is closely involved in organising the Hennie Joubert Piano Competition held biannually in Stellenbosch during the Stellenbosch International Piano Symposium (of which he is on the organising committee).  He has performed yearly as faculty member in the Stellenbosch International Chamber Music Festival since 2011.

Grobler completed his postgraduate studies with Joseph Banowetz at the University of North Texas in the USA, where he obtained the MM and DMA piano performance degrees.  Undergraduate studies were with Joseph Stanford at the University of Pretoria obtaining the BMus and BMusHons degrees in piano performance, as well as the UNISA Teacher’s Licentiate in Piano, cum laude.  His training was further enriched through studies with Polish pianist, Adam Wodnicki, and master classes from a list of artists, of which the most beneficial lessons were from Andrzej Jasinski, Pascal Rogé Leonard Hokanson, and Niel Immelman.  In addition to his activities as soloist, his interest in Art Song led to work with Dr. Elvia Puccinelli and Harold Heiberg at the University of North Texas.

Since his return to South Africa in 2010, he established himself as a pedagogue and maintained an active concert profile, also performing abroad regularly.  His performing interests include solo as well as collaborative work.  Grobler has performed across South Africa in most all important concert venues.  He is heard regularly on Classic-FM radio especially in Johannesburg.