‘The Conversation’, an online platform where scientists collaborate with journalists to share research news and expert opinion, was launched in Australia in 2011. Today, there are country-focused editions of this platform around the world, including the UK, France, Canada, Spain, Indonesia, and the US. Launched in May 2015 as a new Africa-focussed edition, ‘The Conversation Africa’ has since established editorial offices in Johannesburg (South Africa), Lagos (Nigeria), Nairobi (Kenya), and Accra (Ghana), and has an editor in Dakar (Senegal) in partnership with the French edition.

In a current research project at CREST, Dr Lars Guenther and Dr Marina Joubert are exploring this novel platform for science communication that is blurring the boundaries between science journalism, institutional science communication and scientists-journalist collaborations. A new research article published in the journal Public Understanding of Science reports on the first phase of this research, looking at the nature and impact of The Conversation Africa.

In the first five years since its launch, a total of 5 392 articles were published by 3 589 authors, affiliated at 736 research institutions. Authors were mainly from South Africa, but the contributions from other countries on the African continent are increasing. The number of articles published per month remained steady over the first five years. However, the platform increased its audience reach over the five years since its launch, growing in terms of website impressions, cases of republishers, and engagement on Facebook.

In this article, the authors discuss how so-called amplifier platforms, such as The Conversation, challenge the traditional roles of scientists and journalists in the science news cycle. By looking at how articles are republished in mainstream media or shared via social media, the authors explore the role of The Conversation Africa as an inter-media agenda-setter. They found that mainstream media more often republished stories related to politics or economics (which is the dominant content of this platform), while stories about social issues such as education, conservation, and art were more often shared on social media. 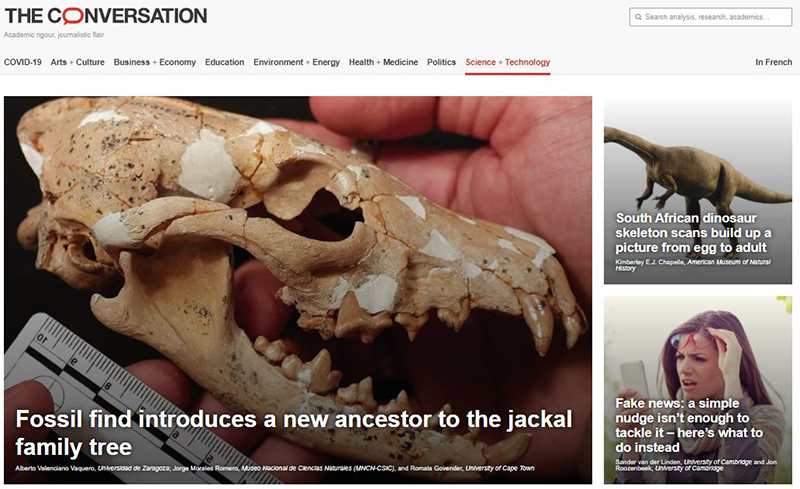 ‘The Conversation Africa’ was launched in 2015 with editorial offices in five African countries.

Because these cookies are strictly necessary to deliver the website, refuseing them will have impact how our site functions. You always can block or delete cookies by changing your browser settings and force blocking all cookies on this website. But this will always prompt you to accept/refuse cookies when revisiting our site.