“We enjoyed the ride, the University’s name was held high, and our fundraising drive for bursaries is well under way. It was a great success,” Maties Rector and Vice-Chancellor Prof Wim de Villiers said upon finishing the Cape Town Cycle Tour on 11 March. The tour – the world’s largest timed cycle race – extends over 109 km, and Sunday was the 40th edition. 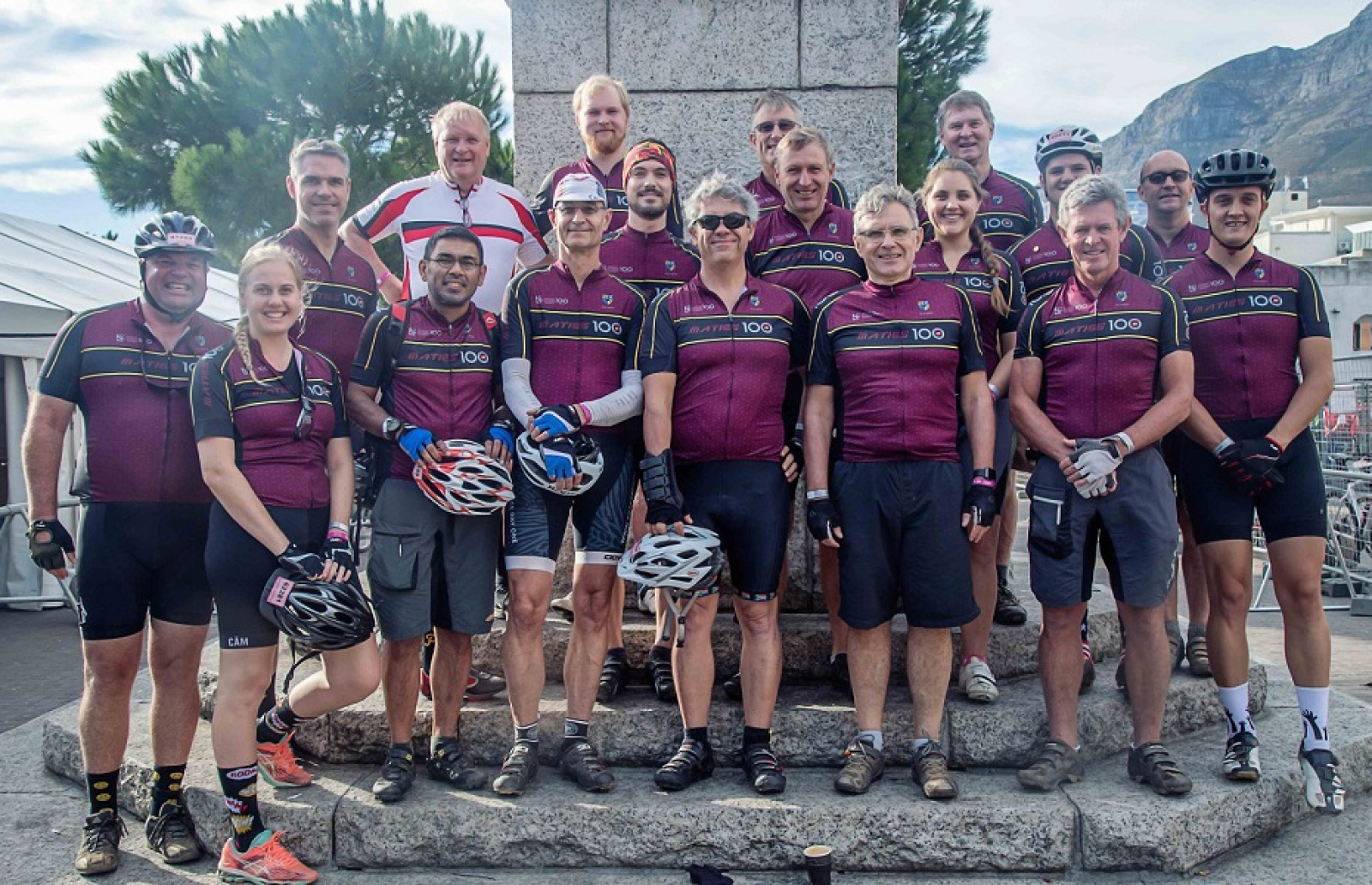 Prof De Villiers took part along with more than 50 staff members, students, alumni and friends of Stellenbosch University (SU). The group cycled under the name #Maties100 to commemorate SU’s Centenary and raise funds for student bursaries.

“It was such a beautiful day. We could not ask for more. But I must say, it was sad to hear afterwards that there had been fatalities in the race. Our condolences to the loved ones of the deceased,” Prof Schoonwinkel said.

Dr Le Roux van der Westhuizen, who was chairperson of the SRC in 1985, finished quickly with a time of 3 hours, 21 minutes and 7 seconds, and SU alumnus Grant Neser five seconds later.

“It was an incredible experience. I am happy to support the cause of bursaries and would like to encourage others to do the same,” Van der Westhuizen said. It was his 16th Cape Town Cycle Tour.

Nearly R105 000 has already been raised through the GivenGain platform, while direct donations to the University are still being processed. The fundraising campaign continues (visit http://bit.ly/Maties100 to donate).

Prof Sophia du Plessis, an Economics lecturer at SU and her husband Francois rode a tandem bike. “We thoroughly enjoyed it. Thanks to all involved,” she said.

“We knew they would do well, as they are currently preparing for the Cape Epic (18-25 March),” said the BMT team manager Unathi Msophi. The team comprises a group of friends from Kayamandi in Stellenbosch. “We are pleased to have contributed to bursary funds because it helps create a better future for the youth,” he added.

The team’s morale was boosted shortly before the race when Adv Thuli Madonsela, former Public Protector and now professor in SU’s Faculty of Law, tweeted: “Good luck #Maties100. Thanks for your contribution to #SocialJustice for disadvantaged students.”

Following the event, the Alumni Office hosted Matie cyclists in a hospitality tent.

Andrew le Roux, an alumnus from Johannesburg and one of the University’s regular donors, participated with his son, André. “You will see us again because André wants to enrol at Maties next year.”

Another father-and-son duo was Maartens and Daniel Heynike from Randburg, both alumni. “It was my most enjoyable race ever, and this Matie cycling shirt is the best,” Maartens said. It was his 5th Cape Town Cycle Tour.

At 76, Dr Henk Groenewald was probably the oldest rider in the team. His time was 04:28:51. “I last did the Argus 20 years ago but wanted to ride it again to give back to my alma mater,” he said.

“The spirit on the road was fantastic, and the University’s brand is clearly very strong. Time and again we got cheered on with a ‘Maties!’ as people noticed our cycling shirts,” Desmond Thompson of SU’s Corporate Communication Division said.

Only 100 shirts were manufactured exclusively for the Maties100 initiative in SU’s Centenary year. A limited number are still for sale at R2 000 each to supplement the bursary fund. Those interested are welcome to send an e-mail to marvin@sun.ac.za.