Mariske makes a name for herself on the cycling circuit

From competing in cycling world cups to representing South Africa on the world stage, Maties alumna Mariske Strauss has been making quite a name for herself on the cycling circuit. Mariske, who specialises in cross-country mountain bike racing, says she discovered, already in her student days, that if you really want to do something, anything is possible – provided that you are willing to put in the dedicated effort it requires.

She took some time out of her busy schedule to chat to us from Albstadt, in Germany, where she was competing in yet another world cup event. 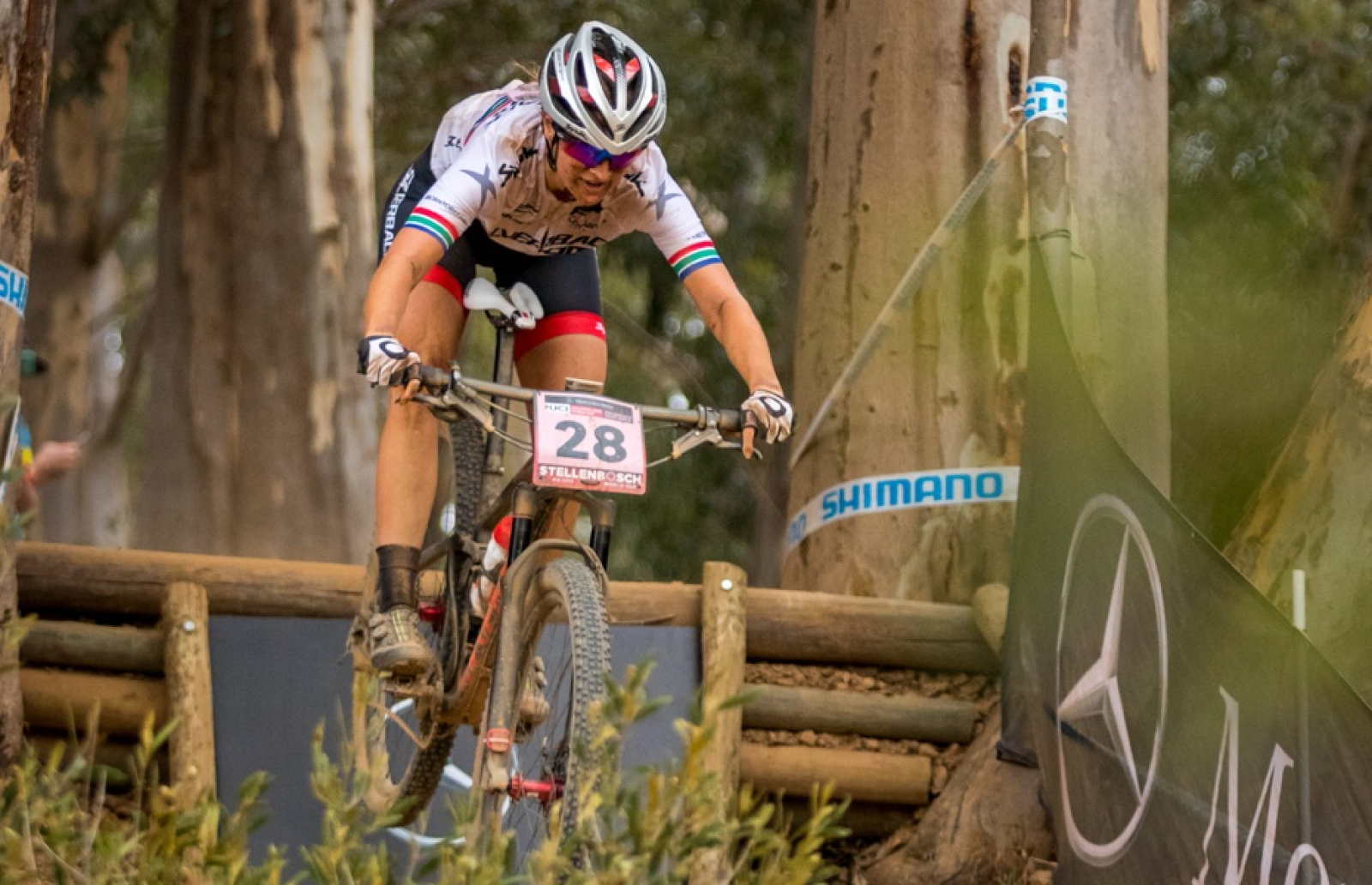 Please tell us about yourself.

I am a Capetonian – grew up in Durbanville and matriculated from Stellenberg High in 2009. After quite a journey I ended up moving to Stellenbosch in 2013 to study BSc Sport Science.

Would you elaborate on this journey?

I first took a little detour to Johannesburg, where I raced full time for the Dimension Data team, formerly known as MTN Qhubeka. However, I was unhappy. So, I decided to move back to Cape Town, where I received a scholarship from a college in the United States. I went there in 2012, but found it to be frustrating living in the USA and wanting to focus on XCO racing, which is based in Europe for the most part. Only then did I enrol at Stellenbosch for the Sport Science degree, which proved to be the perfect fit for my career as an athlete. In actual fact, I have always wanted to know how my “engine” operates, and the Sport Science programme helped me do that.

You have had a busy year thus far – competing in the Absa Cape Epic, the Mountain Bike World Cup in Stellenbosch and the Commonwealth Games in Queensland, Australia. Tell us about your experiences at these races.

Indeed, this has been quite a busy year, and much more racing is lying ahead. The Epic was, as usual, amazing; and besides the gastro I suffered on the second and the last day, the race went down smoothly. The organisers really put together a world class event and it is always a massive privilege to race across the Western Cape along those spectacular routes. The World Cup in Stellenbosch was also amazing. It was even more special to race right past my home faculty and have a home crowd backing me.

Then there was the Commonwealth Games … as always, such an honour to represent my country. Unfortunately, it was not the best day for me on the bike and I just aimed to make it to the finish line. However, I firmly believe that we must take the good with the bad. That “off” day just put an extra bit of fuel on the fire for the upcoming world cup events.

Why did you choose cycling?

Well, to be fair, I did any and all school sports growing up. My mountain biking career started with my dad and older brother. I was always attending events because of them, and then I thought, hey I can do this … The bug bit and I have never looked back. I was ten when I started racing at national level.

Is cycling your full-time job?

Yes, it is – thanks to my team and sponsors, Silverback OMX Pro Team. Without them I would not have been able to do this sport that I love. I also profit from the degree that I obtained from SU at the end of 2016 by coaching and working for Science to Sport/Ergofit at SSISA (Newlands) alongside my own coach, Dr Jeroen Swart. It helps to keep my mind active and gives me a sense of normalcy as well.

What goes into being a professional cyclist?

Well, a lot of training – mentally, physically and emotionally. It is a quite lonely road but one I would choose over and over again. My faith really plays a massive part in this aspect of my life, too. I love what I do and the freedom that comes with it. The package entails many sacrifices, but so does any sport or profession when you decide to compete at the highest level. Of course, sport at international level also involves quite a bit of travel, but having done this for the past 17 years it is my normal and I can’t really imagine any other way.

What would your message be to young people?

During my years at varsity, I suffered two major injuries. Looking back, I am actually thankful for those experiences because it helped me grow into a more rounded person and athlete. Not that I would recommend getting injured as a career move!

I know it seems over-used, but my message would be to follow your heart and chase your dreams, whatever that may be. With prayer, faith and hard work what seems impossible soon becomes inevitable.