Nell Naudé reminisces about her stint as Intervarsity pianist

It’s autumn 1950 and Stellenbosch is abuzz. The annual Intervarsity competition against Ikeys is around the corner. Engineering student Con Hofmeyr has been selected as head cheerleader for the third consecutive year, but for the first time in 26 years a woman will accompany the supporters in the stands on the piano. 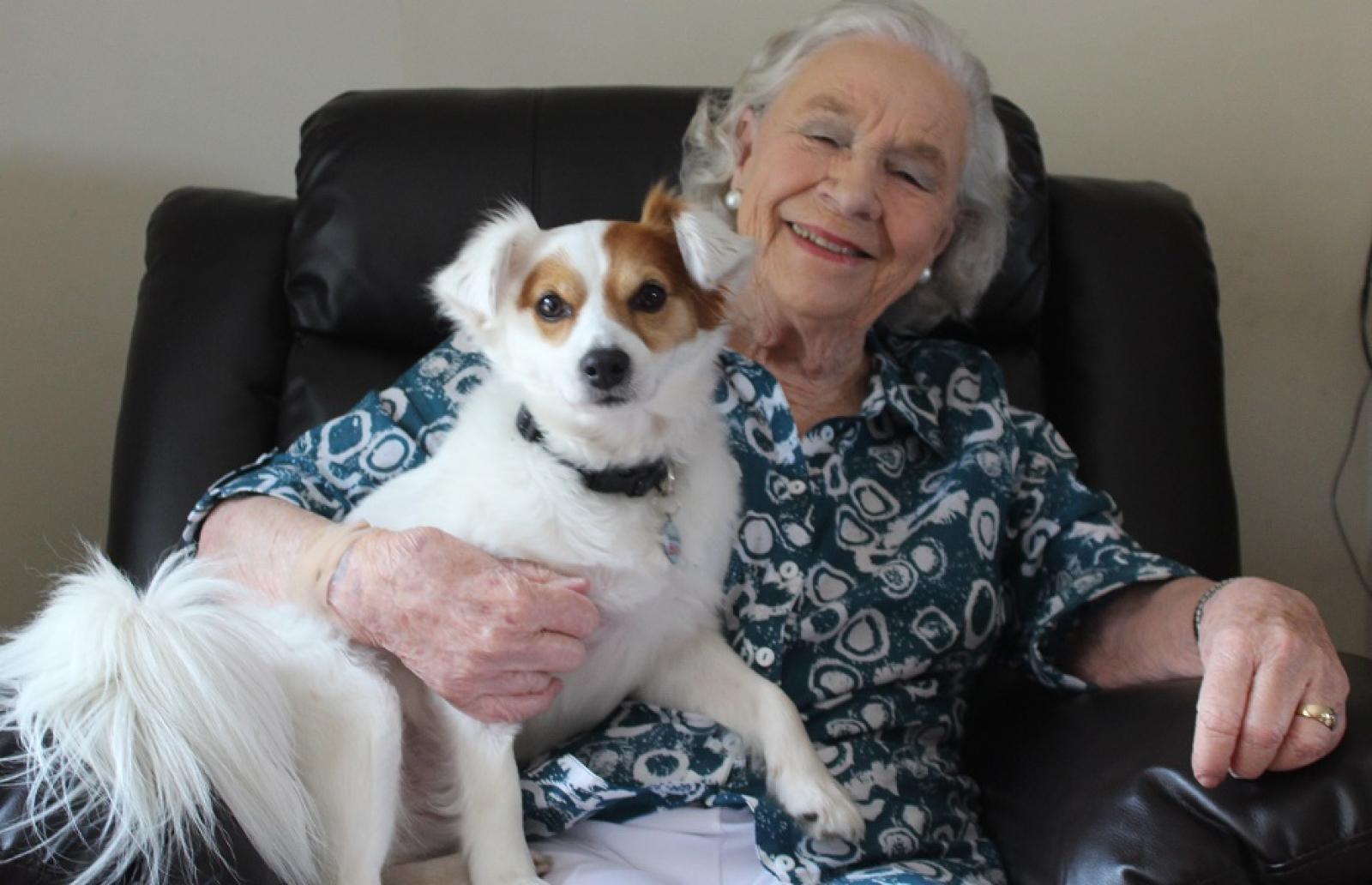 Nell Naudé and her dog Dexter.

Several newspapers report on this – Die Burger, The Cape Times as well as the local newspaper in Ms Nell de Vries’s hometown, Worcester.

The latter elaborates by telling its readers that this former head girl of the High School for Girls (Hoërskool vir Meisies) in Worcester composed the school’s song at the tender age of 15, when she was in standard eight (grade 10).

Nell, a third-year music student, is only the second woman to be chosen as pianist. According to newspaper articles, a Miss Anna Hanekom was the first woman to accompany the Maties on the piano. This was 26 years earlier, in 1924.

It’s spring 2019 and 90-year-old Nell Naudé (she married Johann Naudé, a farmer from Worcester, in 1954) remembers those days with a smile.

“Intervarsity was the event of the year,” she explains. “Students had to attend sing-songs if they wanted tickets.”

The cheerleader and pianist were selected at the first sing-song event of the year. Students could nominate people and all the nominees had to play something on the piano before voting started.

“I got such a fright when they called my name. The pavilion was packed. I’m breaking into a cold sweat just thinking about it,” she laughs.

She was selected by an overwhelming majority and the preparation started. The pianist was accompanied by other musicians on instruments like the accordion and contra bass. Stamp cards were distributed to students and a complete stamp card was crucial for those hoping to get a seat.

In 1950, the Intervarsity was hosted by Ikeys at Newlands. It was the host university’s responsibility to make sure that the pianos stood ready in the stands.

“It was great fun,” says Nell. “It was a real show.” She served as pianist for three years.

Nell was also primaria of Greylock, a small residence for students studying music. Some of her best memories of her time in Stellenbosch include impromptu meetings at a café called Suikerbossie and dances in the town hall. One of the orchestras she heard there, Bobby’s Five, played at her wedding as well.

“We were only about 4 000 students and you knew almost everyone. We had so much fun. Those were some of the best days of my life.”

After their wedding, she and her husband settled on a farm near Worcester and raised five daughters. Nell was also a music teacher in Worcester. Then, 33 years ago, they sold the farm and moved to Hermanus.

Today Nell, who lives in Onrus, has 10 grandchildren and four great-grandchildren. There were 29 people around the table when she turned 90 in October.

“I’m very blessed. My mind is still clear. I still drive my own car,” she says. Sy loves crossword puzzles and Sudoku but plays bridge rather than the piano these days.

“And we play competition bridge, not social bridge,” she emphasises.

She also enjoys attending local music performances, but the grand piano she got in her third year at university now serves as a display surface for family photos.

“Everyone wants it (the piano) but I don’t know where it will go. None of my children really have an ear for music,” she ponders. Hopefully someone from the next generations will carry the musical torch…