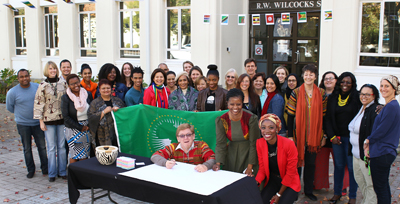 Flags of 54 African countries flew proudly at Stellenbosch University (SU) on Africa Day on Monday 25 May. Taking up President Jacob Zuma on his call to help promote the African Union (AU), the AU flag was also raised at events hosted on the SU and Tygerberg campuses.

President Zuma on Sunday 24 May urged companies and institutions to fly the AU flag alongside the national flag. He also asked South Africans to learn the AU anthem.

Celebrating this year's Africa Day theme "Opening the Doors of Learning & Culture from Cape to Cairo" the Postgraduate and International Office (PGIO) invited students and staff to write congratulory messages and leave it outside their office in the Wilcocks Building. The PGIO also held an open mic session where Maties expressed themselves through poetry, song and dance. The lunch-hour event kicked off with the crowd singing the AU anthem followed by music from SU student and up and coming musician Zander Stander.

Joining the events outside the Wilcocks Building, Prof Wim de Villiers, Rector and Vice-Chancellor, wrote down on a board his message "We are Africa - Africa solutions to African problems". Speakers at the event echoed Prof de Villiers message encouraging the crowd to take pride in being African.

Farai Mubaiwa, head of the student-led Africa Matters Movement, ask them to help change the "problematic" African narrative. Referring to the "extensive media coverage" of the Charlie Hebdo- shooting on 7 January, she told them the Baga massacre in Nigeria the following day hardly made the news. She asked spectators to be proud of their heritage.

In his speech, Robert Kotzé, Senior Director of the PGIO, said the SU is proud of its footprint on the continent. He told them that SU's student population comprised 93 % Africans, South African students included. SU also held an Africa Day Seminar with the theme "Increasing our African Footprint in Postgraduate Education and Research" on the Tygerberg Campus.