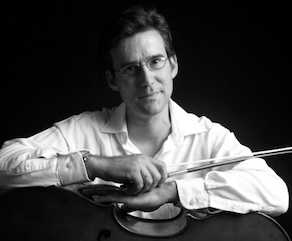 Peter Martens holds a Masters Degree from the University of Cape Town and a PhD from Stellenbosch University where he studied in his formative years with Dalena Roux before studying with Heidi Litschauer at the Mozarteum in Salzburg. In 1993 Peter returned to South Africa and occupied principal positions in the New Arts Philharmonic Pretoria and Cape Philharmonic before moving to Stellenbosch University where he currently holds the position of Director of the Stellenbosch International Chamber Music Festival.

He is a member of the Amici String Quartet, enjoys chamber music with amongst others, Leon Bosch (double bass), David Juritz (violin), Benjamin Schmid (violin) and Leslie Howard (piano), and has performed with the Brodsky String Quartet in London. Concerto engagements have resulted in collaborations with a number of fine conductors including Victor Yampolsky, Bernard Gueller, Douglas Boyd, Wolfram Christ, Nicholas Cleobury and Jonas Alber.

He has participated in festivals in Russia, Holland, Salzburg, Zimbabwe, Mozambique and Portugal as well has having performed in the U.K. and U.S.A.

Many South African composers have written for him, the most notable composition being the Cello Concerto by Allan Stephenson, which he recorded for Meridian Records with the Cape Philharmonic. He has recorded the Bach Cello Suites and Beethoven Cello Sonatas for TwoPianists Records. Peter has recently acquired a Baroque cello having performed with L’Orfeo Baroque in celebrating Dr. Barry Smith’s 50 years of music making in Cape Town.

He is married with two children to violinist, Suzanne Martens.