“A paper on South Africa’s scientific capacity was presented in November 2015 by Professor Heidi Prozesky, Research Manager at SciSTIP, at the second AfricaLics International Conference, AfricaLics’15. The conference, hosted by the University of Rwanda, was aimed at unpacking systems of innovation for sustainable development in Africa. The paper was delivered during a special session on building national research capacity on innovation, with a specific focus on South Africa. The presentation drew on two recent SciSTIP publications: the report, “A research and innovation policy framework” and the book, “Doctoral education in South Africa: Policy, discourse and data”.

Professor Prozesky introduced her talk by explaining the conceptual framework recently developed by Prof Johann Mouton to measure and track South Africa’s research and innovation (RI) performance. As scientific capacity constituted the focus of her presentation, she proceeded to describe in more detail those dimensions of the framework that have direct bearing on this topic, i.e. financial investment in RI and human resources for science and technology. Any measurement of scientific capacity also needs to take into account what one is measuring that capacity against, and prior capacity, a target or standard, and bechmarking were presented to the audience as various options in this regard. Finally, it needs to be recognised that assessment of scientific capacity occurs within a specific policy context, characterised by the different and sometimes contradictory imperatives of growth, transformation, efficiency and internationalisation. After reflecting critically on these issues involved in the measurement of scientific capacity in South Africa, the remainder of the first part of the paper was devoted to the reporting of empirical evidence with regard to the most relevant dimensions. Interpretation of that evidence led Professor Prozesky to conclude the following: South Africa is becoming more dependent on the higher education (HE) sector for financial investment in RI, while the investment of the business sector in this regard has been declining. As the HE sector has not expanded much in terms of capacity, that capacity is becoming increasingly stretched. South Africa has what is arguably the strongest scientific capacity in Africa, but it also faces serious challenges in this regard. Partly in order to address these, the National Planning Commission and Department of Science and Technology are calling for the tripling of the number of South African doctoral graduates annually – a topic to which the second half of the paper was devoted. Again, the audience was required to reflect critically on commonly held assumptions regarding the role of the PhD in the country’s knowledge economy, as well as the tension – or even contradiction – between the demands for efficiency and quality of PhD output. In other words, achieving the one (continuous growth of PhD output) undermines the achievement of the other (maintaining standards of quality of that output), especially in a science system seriously constrained in terms of resources. Nevertheless, based on some of the most recent evidence, Professor Prozesky concluded that South Africa is showing exceptional rates of growth in doctoral enrolments and graduates, as well as substantial shifts in terms of equity demographics. In general, the system can be described as “adequately efficient”, with the exception of one aspect: a highly inefficient postgraduate progression rate. This can be traced back to the part-time nature of doctoral studies for many South African students, which poses one of the major challenges to maintaining high standards of doctoral education in the country. The implication of this “efficiency challenge” is quite obvious: we need to ensure that larger proportions of postgraduate students are able to study full-time, with sufficient funding, and not interrupt their studies. 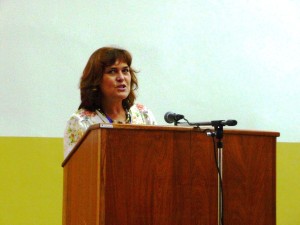