OP-ED: Reclaiming the city and building an urban common in Woodstock 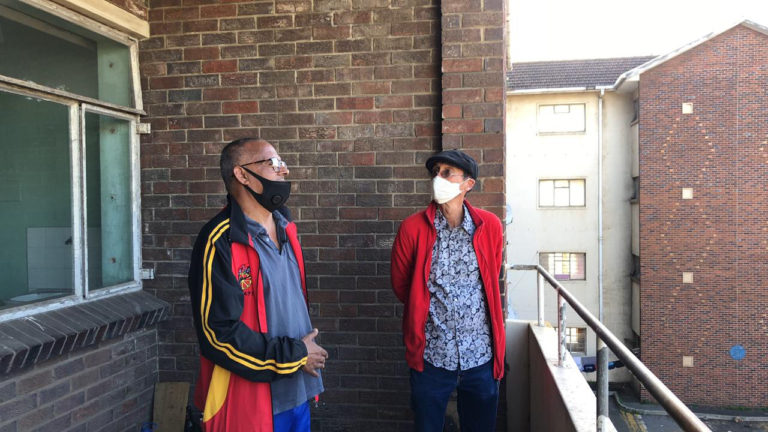 By Steven Robins. First published on The Daily Maverick on 6 January 2021.

The occupation and repurposing of Cape Town’s vacant Woodstock Hospital into Cissie Gool House is an exercise in patient and long-term ‘slow activism’ that is strikingly different to the politics of the instant media spectacle that characterises so much of the contemporary political landscape.

I first met Bevil Lucas in his small room in the former Woodstock Hospital, now an occupied building called Cissie Gool House (CGH). Ironically, his room once served as a consultation room where he came to collect his diabetes medication in the early 2000s. Lucas is one of many Reclaim the City activists involved in an occupation that is supported by NGOs and civic organisations such as the Woodstock Residents’ Association, Ndifuna Ukwazi and the Cape Town-based Commoners Project co-ordinated by Andrea Couvert and Naren Sewpaul.

Whereas city officials and urban planners almost everywhere believe that resources such as land and housing need to be regulated by the bureaucratic state and private property, Reclaim the City activists such as Lucas insist that communities have the capacity to govern themselves. They also believe that the CGH occupation can be run as an urban common, with decision-making being done by the representative structures of the roughly 1,000-strong residents living in the former hospital buildings.

However, seasoned activists such as Lucas are acutely aware of the challenges that come from working with a group of socially and economically marginalised individuals and families of occupiers who do not necessarily have a common ideology or shared history of collective action and self-governance.

In his 2018 book, Building and Dwelling: Ethics for the City, urban sociologist Richard Sennett writes about the ideal of the “open city” that embraces difference, fluidity and non-hierarchical values and democratic practices, in contrast to the “closed city” with its top-down, expert-driven traditions of orderly and controlled technocratic urban planning. For Sennett, the champion of this conception of the open city was Jane Jacobs, the urban planner and author of The Death and Life of Great American Cities (1969).

Jacobs’s idealistic vision of the open city focused on the primacy of direct democracy through face-to-face deliberation at the neighbourhood level, for instance through town hall meetings. She also believed that it was through the daily rituals of neighbourliness and informal interactions and conversations in public spaces that social density and diversity give life to a city. For Jacobs, the dynamic open city can be disorderly and fractious at times, but this is seen to be better than the closed city, which is typically tightly controlled by the technocratic state and the “fast money” of private capital with its mega property development projects.

In many respects, Jacobs’s vision of urban life resembles the forms of self-governance promoted by Cape Town’s commons activists such as Lucas, Couvert and Sewpaul.

The idea of “the commons” is currently circulating globally in activist and social movement circles, as well as in the NGO, donor, academic and policy domains. The theory underpinning the concept is usually traced to Nobel laureate Elinor Ostrom’s 1990 pioneering work on the governance of the commons. Ostrom, an economist, challenged Garrett Hardin’s influential Tragedy of the Commons 1968 thesis which argued that a natural resource such as communal grazing land is typically over-grazed by “freeloaders” because it is not in any individual’s immediate self-interest to promote the longer-term public good and sustainability of the resource in question.

Ostrom won a Nobel Prize in Economic Sciences for her critique of Hardin’s thesis by demonstrating that, even without regulation by means of private property or the state, it was possible to protect the resources of the common by means of self-organising forms of collective action. It is precisely this aspect of “self-organising” that Reclaim the City and the Cape Town Commoners Project seek to promote.

However, critics have persistently portrayed the commons as a romantic, naïve and utopian ideal that is not practical. Some of these critics of commons-thinking insist that self-governance without the state and the market is a fantasy based on reified ideas about the imagined wisdom of pre-modern agrarian societies in faraway places.

During my recent visit to the CGH occupation, Lucas acknowledged the many challenges to self-governance in an occupation where many of the residents are unemployed and would otherwise be homeless and destitute. Whereas relatively effective self-organising structures such as street committees emerged in many South African townships during the anti-apartheid struggle, most of the marginalised CGH occupants are not able to draw on these historical experiences of collective action.

Nonetheless, Lucas spoke about the various CGH self-organising initiatives that were dealing with conflicts, domestic violence, substance abuse, food provision, medical care and recreational activities for the young and elderly. Notwithstanding these organisational innovations, the occupation has recently come under concerted attack from some City of Cape Town officials.

The researchers, who had all spent many months doing empirical research and fieldwork at the two Reclaim the City occupations, highlighted the many positive and challenging aspects of what was happening at Cissie Gool House in Woodstock and Ahmed Kathrada House in Green Point. For example, they drew attention to the important role the disciplinary committees played in dealing with internal conflict, rule-breaking and gender-based violence.

Similarly, at Advice Assembly meetings, NGOs such as Ndifuna Ukwazi and legal experts provided CGH activists and residents with legal information about tenants’ rights and other important issues.

As a former chef and veteran trade unionist in the commercial catering sector, Lucas became involved in the CGH occupation from its inception three years earlier. He told me that, unlike his earlier experiences of trade union organising, where you can go home at 5pm, being an organiser in CGH is a 24-hour occupation: “At times I have to pretend I am not in my room just to get some rest from the ceaseless daily demands.” This everyday organisational labour is rendered invisible in Booi’s portrayal of the occupation as an anarchic space of freeloaders and criminals.

Lucas’s account of his activist work revealed the complexity of the issues CGH’s organisational structures have to deal with daily. This includes fixing broken infrastructure; negotiating for refuse collection and water, sanitation and electricity services with city officials; ensuring Covid-19 compliance by residents; providing food and medical care to elderly, children and destitute occupiers, and sustaining initiatives such as the communal kitchen, and sports and recreational activities for youth. The Woodstock Residents’ Association also supports these CGH activities and works to consolidate co-operative relationships with the local community.

As Herold, Hansen, De Barros and Wingfield noted in their Daily Maverick article, CGH is an experiment in alternative forms of social housing and self-governance. But, like so many of these kinds of activist initiatives, sustaining the occupation requires patient and long-term forms of “slow activism” that is strikingly different to the politics of the instant media spectacle that characterises so much of the contemporary political landscape (see Steven Robins, 2014: “Slow activism in fast times: reflections on the mass media after apartheid”, Journal for Southern African Studies Vol. 40, No. 1, 91–110).

As we walked through the occupation with its creatively repurposed operating theatres, consultation rooms and hospital dispensaries which have been transformed into family spaces, Lucas spoke about how his background as a trade unionist had prepared him for these challenges.

Lucas grew up in the working-class neighbourhoods of Steenberg and Retreat on the Cape Flats. After high school, he decided to become a chef as waitering was a traditional occupation in his family. However, when he tried to apply to hotel school, he encountered apartheid-era bureaucratic red tape and had to apply to both the Department of Coloured Affairs and Indian Affairs to get permission to attend a hotel school in Durban that was reserved for those classified as Indian.

While he was studying in Durban he became involved in the Young Christian Workers (YCW), an organisation that schooled him in youth education for radical change and civic action. One of his first experiences with union organising was the 1981 Wilson Rowntree strike in East London by workers affiliated to the South African Allied Workers Union (SAAWU). He soon became a full-time trade union organiser, an experience that gave him the negotiation and mediation skills that have been so vital at CGH.

These negotiation skills have also come in handy when dealing with Woodstock residents’ concerns about a potential increase in crime resulting from the influx of “strangers” into their neighbourhood. In response to these concerns, open-day events at the CGH were organised to develop neighbourly relations of mutual trust and support. Lucas also spoke about the complicated, and at times conflictual, negotiations the CGH has had with City of Cape Town officials, local politicians and law enforcement officials.

Lucas noted that one of the problems CGH encountered had been to find out exactly what kinds of issues occupiers want to treat as matters of common concern. For instance, Stellenbosch student Matthew Wingfield’s MA research project on CGH found that not all occupiers wanted to be involved in ongoing RTC campaigns. Instead, they viewed living at CGH and being affiliated to RTC as an opportunity for residential stability while they searched for livelihood options. Wingfield discovered that many of the rank-and-file RTC members did not participate consistently in campaigns to challenge spatial apartheid as their immediate concerns were focused on livelihood security.

In a city such as Cape Town, with its long histories of racialised inequalities, poor infrastructure, everyday violence, crime and social tensions in many poor neighbourhoods, translating the idea of the urban commons into reality was never going to be easy. The idea of the commons is clearly not a magic bullet or panacea for processes of gentrification that are causing an increase in evictions throughout the city, but it has provided activists with the possibility of imagining another kind of city, one that is not totally dictated to by the centralising technocratic state and the economic logic of big capital and private property.

In contrast to earlier understandings of the traditional common as a pooled resource — for instance water, fresh air or grass — the idea of the urban common is understood as a set of relations that comes into existence through the encounter of people, things and ideas, and through relations of proximity and interactions in dense networks.

The repurposing of the vacant Woodstock Hospital into Cissie Gool House has been an experiment in creating new relations of social proximity and co-operative interaction among Woodstock occupiers and between them and neighbouring residents. Without the existence of CGH, a large number of marginalised, evicted people would be homeless or living in transit resettlement camps and backyard shacks on the distant Cape Flats.

Although occupations can indeed become problematic spaces, as has been the case with some of the hijacked “dark buildings” in Joburg’s inner city, recent empirical research by Herold et al indicates that this has not been the case at CGH.

Professor Steven Robins is with the Department of Sociology & Social Anthropology, University of Stellenbosch.