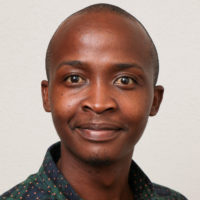 Boitumelo (Tumi) Malope is an industrial sociologist by training and a researcher with an Honours (2013) and Masters (2016) from the University of Pretoria. He holds a PhD from Stellenbosch University (2022) with a dissertation titled: “Power struggles: An exploration of the contribution of renewable energy to sustainable development, decent work and the “just transition” through a case study of wind farm development outside Loeriesfontein, Northern Cape Province (2011-2020).”

Before joining Stellenbosch University, Tumi worked on a number of commissioned research projects with a group of established and upcoming scholars conducting research for trade unions, companies and national public entities. He participated in fifth survey of the Taking Democracy Seriously project which started in 1994 and comprises of surveys of the opinions, attitudes and lifestyles of members of trade unions affiliated to the Congress of South African Trade Unions (Cosatu). The survey culminated in the fifth publication “Labour Beyond Cosatu: Mapping the Rupture in South Africa’s Labour Landscape” co-authored by Malehoko, Tshoaedi and Andries Bezuidenhout.