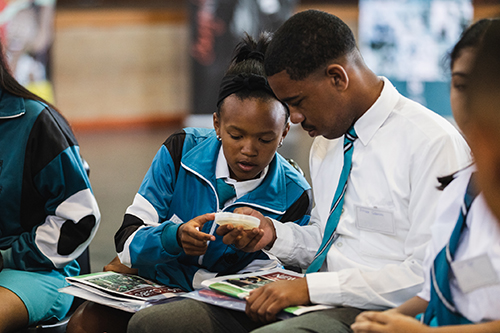 TB researchers recently decided to use hip hop and rap to increase awareness about TB in the community.

The #MBHGHipHop TB intervention, which involved researchers and staff from MBHG and learners from Cedar High School of the Arts in Mitchells Plain, was aimed at raising TB awareness, and at inspiring the youth to follow careers in science.

The programme, presented by the Division of Molecular Biology and Human Genetics (MBHG), promoted engagement and learning in science by means of the popular mediums of rap, hip hop and music.

"The placement of science within a popular culture space provided an opportunity for it to be owned by young people - rather than remaining foreign and inaccessible," said Dannielle Moore,  Communication and Marketing Officer at the MBHG.

This four-day initiative took place took place on 27 – 30 January and was hosted by 13 researchers from MBHG at the University of Stellenbosch. They volunteered to take part in this programme. This engagement project enabled scientists from the MBHG to engage with learners from the above school around the topic of tuberculosis, and how it affects the community. They also focused on the relevant research conducted in the field.

Cedar High School of the Arts is offers subjects such as Dance, Music, Visual Arts, Drama and Design. This school was chosen for the project, as one of the staff members of MBHG is a former learner from this school. Also because of where it is situated, it made it possible to widen the reach of the projects of the MBHG to beyond the Cape Winelands and Tygerberg areas, where there projects are usually run. 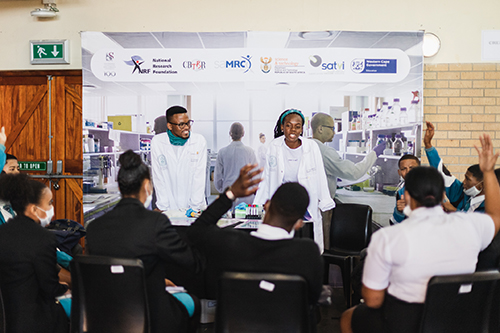 On Day One of the programme, learners were divided into groups of 10 and moved to five different stations. At each one they could learn more about specific aspects relating to TB, such as how it spreads, how it can be prevented, its signs and symptoms, diagnosis and treatment, as well as more about the myths surrounding this disease. Learners received information packs and comics, as well as merchandise donated by the South African Medical Research Council.

Each group was assigned a topic, and by the end of Day One had to come up with a chorus for the song that would deliver their particular message – and record it in the pop-up studio. Day Two consisted of a talk by Mr Goodman Makanda from TB Proof. He is a #TBchampion and disease advocate, and he shared his TB journey with the learners. They had to draw some images based on what the talk meant to them.

Learners were also given masks (like the ones healthcare workers and TB patients use) to wear for two hours to give them an idea of what it felt like.

On Days Three and Four the learners recorded

their lyrics for the songs, and used the time to develop some dance moves and short skits for inclusion in their performance at the final event on the last day.

"This was not a competition and creating awareness was the main aim of the initiative," said Moore.

This final day was all about the music, and allowed learners to take ownership of what they had learnt and created.  This day made time for sound and lighting checks, dress rehearsals and venue set-up. As this school is art-centred, learners were in a domain familiar to them, which made it easier for them to connect with the material and make it their own. Learners performed their tracks live to select classes of the school and to invited community members in order to spread the message about what they had learnt through the popular medium of music. 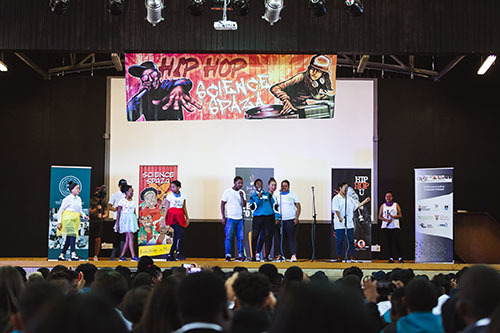 By the end of this programme, the learners had conceptualised, produced and performed five original rap and hip hop songs, which conveyed key messages about TB that they felt were important for the community to know. The content of these songs was based on their interaction with the staff and students of the MBHG. By means of this engagement the learners moved from a place of not knowing much about TB and research efforts to combat its prevalence, to becoming empowered advocates for the cause.

The funders of this event included the Stellenbosch University Faculty of Medicine and Health Science Social Impact Fund and the DSI-NRF Centre of Excellence for Biomedical Tuberculosis Research.