News and reports on future conferences are posted on our front-page blog. 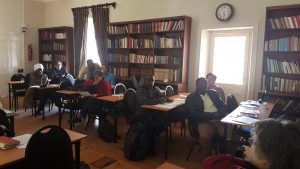 On the strength of the SU English Department’s research and publications in diverse forms of ‘life narrative’, in January 2017 the department was awarded the charter, by the International Autobiography Association (IABA), to found the Africa chapter of this organisation. To this end, Dr Tilla Slabbert and Prof Sally Ann Murray organised an international colloquium titled “The Textualities of Auto/Biography: or, the Auto/biogrAfrical”. This inaugural event was held at Stias on 19-20 October, 2017. The plenary address was given by Dr Ricia Anne Chansky of the University of Puerto Rico at Mayagüez, and editor of a/b: Auto/Biography Studies.

If you are interested in joining IABA Africa, please email both samurray@sun.ac.za and mslabbert@sun.ac.za

Place and Mobility: People and Cultural Practices in Cosmopolitan Networks in Africa, the Atlantic & Indian Ocean

This international workshop with about 30 participants was held at the Stellenbosch Institute for Advanced Studies in 2015. Brill Publishing is reviewing a manuscript of papers from the event, to be edited by Dr Fernando Rosa (Research Associate, English Department, Stellenbosch University), Prof Marina Berthet (Universidade Federal Fluminense), and Prof Shaun Viljoen (English Department, Stellenbosch University). The volume explores the links between creolisation and cosmopolitanism in Atlantic and Indian Ocean locations, on the one hand, and immigration and movements of people within the Sahara and Sahel region, on the other.

This international conference, held in July 2016, was  attended by over 300 delegates from more than 30 countries. It was hosted in Stellenbosch by the SU English Department, in association with the English Department at the University of the Western Cape (UWC), the African Textualities project at the University of Cape Town (UCT), the Cape Peninsula University of Technology (CPUT), the Stellenbosch Literary Project (SLiP) and the District Six Museum. The conference theme addressed how to build on the critical self-reflexivity already embedded in feminist, queer, postcolonial, ecocritical and transnational approaches to literature and culture.  A special issue of Matatu: A Journal for African Culture and Society is in preparation. The working title, “Reading our Ruins: Dialogues between Inner and Outer Realms”, draws on the ACLALS keynote of the writer, scholar, and film maker Yvonne Owuor, which provocatively re-imagines the ruined state of the postcolonial/world through an autobiographical lens. The special issue is co-edited by Shaun Viljoen (Department of English, Stellenbosch University) and Michael Wessels (Department of English, University of the Western Cape) and is set to be published at the end of 2018.

The 3rd Eastern African Literary and Cultural Studies Conference took place at the University of Dar es Salaam between 24- 26 August 2017. The gathering was part of a biennial conference series hosted in Eastern African institutions, in collaboration with Stellenbosch University. Previous conferences were held at the University of Nairobi (2013) and at Makerere University (2015). The conference series seeks to stimulate robust intellectual engagement in literary and cultural studies in the region. Historically, the main nodes of innovative scholarship on Eastern African literary and cultural studies were based in Europe, North America, and, to a smaller degree, South Africa. The conference series not only facilitates intra- and inter-regional conversations, but the development of top quality, publishable research, cross-generational intellectual exchanges, mentorship, and the development of valuable forms of peer collaboration such as supervision, and external examining. (A number of the conference organisers in the Eastern African institutions are SU alumni, having been recipients of Faculty of Arts and Social Sciences Graduate School Scholarships for their PhDs.)