Fire in the mass media – friend or foe?

Many parts of South Africa are prone to fire and in areas where natural and urban areas meet, fire is inevitable. While fire can cause destruction and damage, it also plays a key role in many ecosystems. When used scientifically as a management tool, controlled fires can reduce the risk of wildfires. But, when people do not understand natural fire patterns, it leads to unnecessary fear and resistance against pro-active use of fire as a scientific tool. Therefore, it is important to help people understand the role and benefits of fire and how fire risks can be managed.

Mass media play a key role in how people view fires and how people (including policymakers) respond to fires. When scientists take part in the process of media coverage of fires, the messages that reach the public are more nuanced and balanced, helping people to understand the ecological benefits of fire and the proactive use of fire as a management tool. This is one of the key messages from a research project which looked at how wildfires are portrayed in the South African mass media.

The study shows, however, that scientists’ voices weren’t well represented in the media, with scientists being heard in only 8.7% of all stories.

Dr Marina Joubert (CREST) joined a group of researchers at SANParks to analyse 390 online, print and broadcast media clippings that related to fires within and surrounding South African National Parks over a two-year period. The findings were published in the African Journal of Range & Forage Science and also summarised in a write-up on The Conversation Africa.

When scientists’ voices are absent, journalists tend to overstate the negative effects of fire and focus almost exclusively on fire suppression, with hardly any mention of how fire can be used proactively to manage fire risks. Balanced media coverage of fire can help communities to become fire-resilient, understanding that wildfires are inevitable in some areas, requiring proactive fire management rather than reactive responses. When scientists were interviewed and quoted in media stories, they reflected on both positive and negative effects of fires, highlighted proactive fire management, and explained critical fire ecology concepts.

Better collaboration and more interaction between fire ecologists and journalists can help communities to learn to live with fire and manage fire risks more effectively.

The research article includes ten tips for scientists on how to work effectively with journalists. 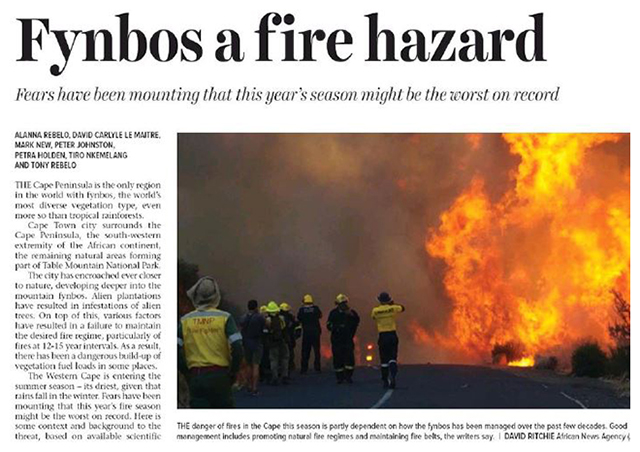