SEMINAR: Azania, Race and the Problem of South African Knowledges 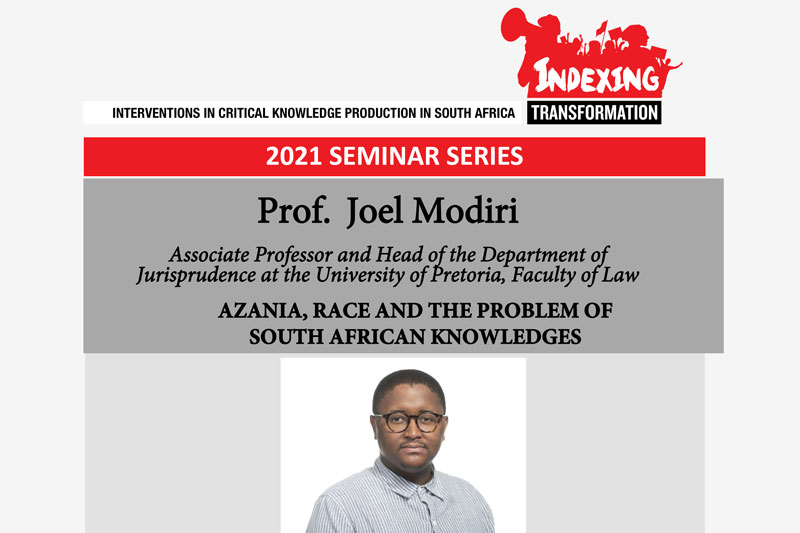 Prof. Joel Modiri
Associate Professor and Head of the Department of Jurisprudence at the University of Pretoria, Faculty of Law

AZANIA, RACE AND THE PROBLEM OF SOUTH AFRICAN KNOWLEDGES

This paper advances a black radical protocol for reading the present South African constitutional order as a fundamentally riven, anti-black and unsettled social order. It follows in particular the Azanian theoretical proposition that “South Africa” itself is the ultimate historical and philosophical problem of and for justice in the present conjuncture. The present reality of racial unfreedom, frequently framed in left-liberal scholarship as a largely socio-economic problem, will instead be analytically rerouted to the constitutive exclusion of Black people from human and political community which was foundational to the making and unfolding of “South Africa”.

This analytic rerouting takes places against a critique of “South African knowledges” – that is disciplinary knowledges and intellectual practices committed to the preservation of “South Africa” as a political concept. The whiteness of these knowledges will be related to their determination by three historical-discursive signifiers: “the right of conquest”; “South Africanism” and “the native problem”.

Against these knowledges, the paper proposes to recall the Azanian political and philosophical tradition to re- articulate, on intellectual ground, the emancipatory and abolitionist horizon first articulated by Africans through the waging of wars of resistance against colonial rule. The historical and theoretical interplay between abolition and Azania will be read in the context of post-1994 South Africa as positing a unity among the abolition(s) of race, whiteness, South Africa and by extension the present South African constitution.