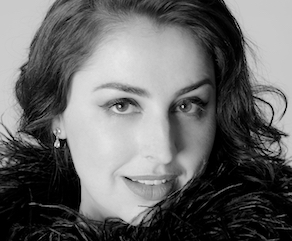 She attended several summer schools such as Ticino Musica in Lugano and AIMS in Graz, receiving lessons from Barbara Bonney, Michelle Crider and Michelle Breedt.

She regularly performs as a soloist in Oratorio and her repertoire includes Händel’s Messiah, the St Matthew’s Passion, St John’s Passion and B minor Mass by Bach, Stabat Mater by Pergolesi, Stabat Mater by Karl Jenkins and Mozart’s Requiem to name a few. Minette is an accomplished singer of lieder both locally and abroad and regularly performs at The Songmakers’ Guild in Cape Town. In 2017 she was nominated for a WoordTROfee for her performance of Mahler’s Das Lied von der Erde. She has performed with all major orchestras in South Africa, most notably the Cape Town Philharmonic Orchestra and the Johannesburg Festival Orchestra.

Minette has performed at several National Arts Festivals in South Africa including the KKNK, Klein Karoo Klassique, AARDKLOP, Woordfees, Cultivaria, Suidooster Fees, Hermanus FynArts and Greyton Classics for All Festival. She has been nominated for three Kyknet Fiësta awards for her contribution to classical music at an arts festival. In 2015 she travelled to France and sang several concerts with the South African pianist Ilse Schumann and baritone Niël Rademan.

Minette regularly adjudicates at Eisteddfods and often travels outside of South Africa to Namibia and Zimbabwe to teach and perform. Since 2016 she has travelled to Maputo, Mozambique to perform at the Xiquitsi Mùsica Clàssica festival, where she also presented master classes. She is the head of the Singing Division at Stellenbosch University and fills the position of Senior Lecturer in Singing. She runs a very successful series of workshops “Working with Young Voices” and regularly presents these to teachers and singers. Minette made her American debut when she performed as soloist in Beethoven’s 9th Symphony with the Minnesota Orchestra in Minneapolis in July. She also accompanied the orchestra on their South African tour as part of their Mandela 100 celebrations.