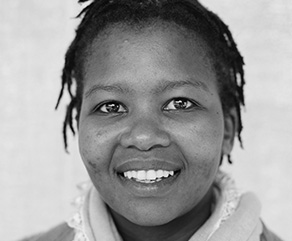 Ncebakazi Mnukwana has been appointed lecturer of Music Education in 2009 at the University of Stellenbosch Music Department where also teaches Ethnomusicology and has taught World Music.

When awarded an academic scholarship to study towards a Masters in multicultural education at the Oslo University College, Mnukwana became the musical director of Inkululeko (2002 – 2005), a choral ensemble formed by the South African political exiles in Oslo, Norway in the late 1980s. Back in Cape Town she has worked on a volunteering basis as the vocal instructor and conductor for The Pilgrimage Ensemble (2009 – 2012) at the Mowbray Seventh-Day Adventist Church.

She an active member of the Cape Cultural Collective, where she sings in the multilingual choir Rosa since 2012 and is an indigenous instrumental soundscaper for uHadi (2013), a poetry and musical stage production commissioned for the French South Africa Season 2012 / 2013. She has also been the commissioned music director for Igqhiya Emnyama (2015) by Cindy Mkaza-Siboto for the Infecting the City, Cape Town and Insurrection III The Storming (2015) produced by South African History Online.