OP-ED: Military not a magic bullet: South Africa needs to do more for long term peace 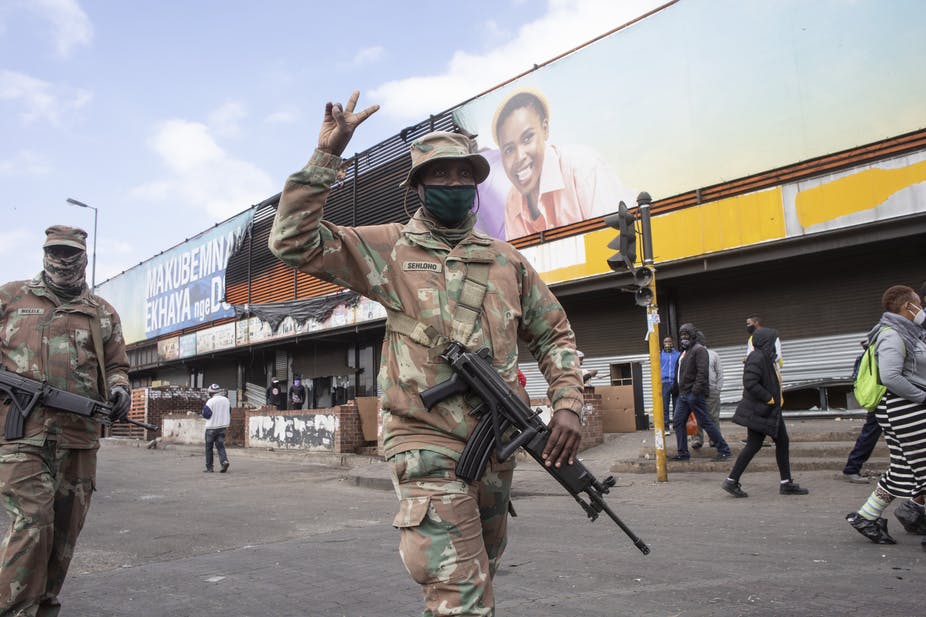 By Lindy Heinecken. First published in The Conversation on 26 July 2021.
(Photo: EFE-EPA/Kim Ludbrook)

In a show of force unprecedented since South Africa became a democracy in 1994, the South African National Defence Force has commissioned 25,000 soldiers for deployment across KwaZulu-Natal and Gauteng, the two provinces most affected by recent riots and large scale looting.

President Cyril Ramaphosa announced the deployment of the troops to support the country’s police, who had been overwhelmed by the scale of the violence.

Governments usually deploy the military as the last line of defence when they face an insurrection or revolt. The threat of or use of military force is the ultimate arbiter to quell unrest that threatens state stability or the safety of citizens, as seen in Nigeria, where the deployment of the army on internal security operations has increased dramatically since 1999.

In South Africa, the military has recently been deployed to counter gang violence on the Cape Flats and during the COVID-19 pandemic. In all these instances, there are concerns about how effective it is in these roles.

In South Africa, for now, the deployment of the army troops to assist the police has brought about an uneasy calm. But what South Africans are seeing is a negative peace – where a degree of normality returns, but in which the underlying causes of the conflict remain.

The military may help create a more stable and secure environment, curb violence and unrest in the short term, but this is unlikely to result in a sustainable and lasting peace. The cultural and structural issues underlying the violence need to be addressed. These relate to the inequalities and injustices embedded in the structure of society.

The military is no magic bullet.

There are many concerns around the use of the military internally in domestic operations within the borders of one’s own country.

The first concerns the government’s use of the military against its own citizens. As seen in both Nigeria and South Africa, the military is typically not trained or equipped to deal with civil unrest and has limited experience in riot control.

One risk is that communities might deliberately act out in ways that provoke the soldiers, which could result in excessive use of force. This can affect trust in the military, affecting the legitimacy of the state. The South African government has already faced criticism for its heavy handed and highly militarised approach during the early phase of lockdown in 2020. However, in general the population has a far higher level of trust in the military than in other state institutions.

The second risk pertains to prominence given to the military when faced with situations of civil unrest. Giving the military a prominent role in political decision-making in dealing with civil unrest can lead to a culture of militarism and militarisation. This results in the increased political reliance and economic investment in the military to assist with solving societal problems.

This can undermine attempts at finding more constructive approaches at conflict resolution.

The army will inevitably be called in again to support the police. Whether the soldiers can provide this support given their limited capacity is the big question. Those deployed are predominantly from the infantry, of which there are only 14 battalions, not all of which can deploy internally. Then there are the commitments to peacekeeping operations and the border, and now to Mozambique.

In its present form, the military cannot adequately respond to the threats facing the country internally and externally, due to the way it is structured, funded and trained. The military is structured for conventional warfare. This requires expensive equipment and training and does not allow sufficient flexibility to perform the functions it actually does.

South Africa needs a military that is more capable of responding to all the challenges facing the country. These include a mix of military and policing functions. This would mean restructuring the military to be able to put more boots on the ground. What is needed is more infantry troops, trained and equipped for the tasks they are required to do. This is less costly than preparing for conventional warfare, and using the army in collateral roles as it does now.

These changes would ensure that it could meet roles like peacekeeping, border control, support for the police and countering terrorism more effectively.

Beyond this is the need to address the current inefficiencies in the state security cluster. Clearly there is a lack of visionary leadership, accountability and oversight, to enable these sectors to function more effectively.

The lack of effective intelligence has meant that both the military and police were unable to put preemptive defensive measures in place to tackle the recent violence and looting, which has left more than 330 people dead.

A more comprehensive approach to security is required. As indicated by soldier-scholar Laetitia Olivier in relation to gang violence, what is needed is a coordinated and comprehensive plan to address the twin challenges of security and economic development.

Security and economic development are intertwined; the one cannot be achieved without the other. To date, the government has failed on both accounts, which has led to the current crisis.

What is needed is a clear national security framework to repurpose the military in terms of its most likely future roles, missions and goals. These are the roles which the military is currently performing, but it doesn’t have the force design and structure best suited for the tasks.

Tough decisions have to be made in terms of personnel, rejuvenation and equipping the military for its future roles and functions, given the current security threats facing the citizens of South Africa. This does not imply more investment in defence, but better use of the resources available.

More than ever before, decisive leadership is needed from politicians, military leadership and civil society to march the South African National Defence Force in the right direction.