To imagine, or re-imagine, the Anthropocene, an unprecedented era of planetary change induced, or at least heavily influenced, by human activity, is daunting. Yet the idea of the Anthropocene also invites a tremendous scope for creativity. How do we develop the tools, and the language, to think and act and live in a way that makes it possible for a ‘Good Anthropocene’ to emerge? 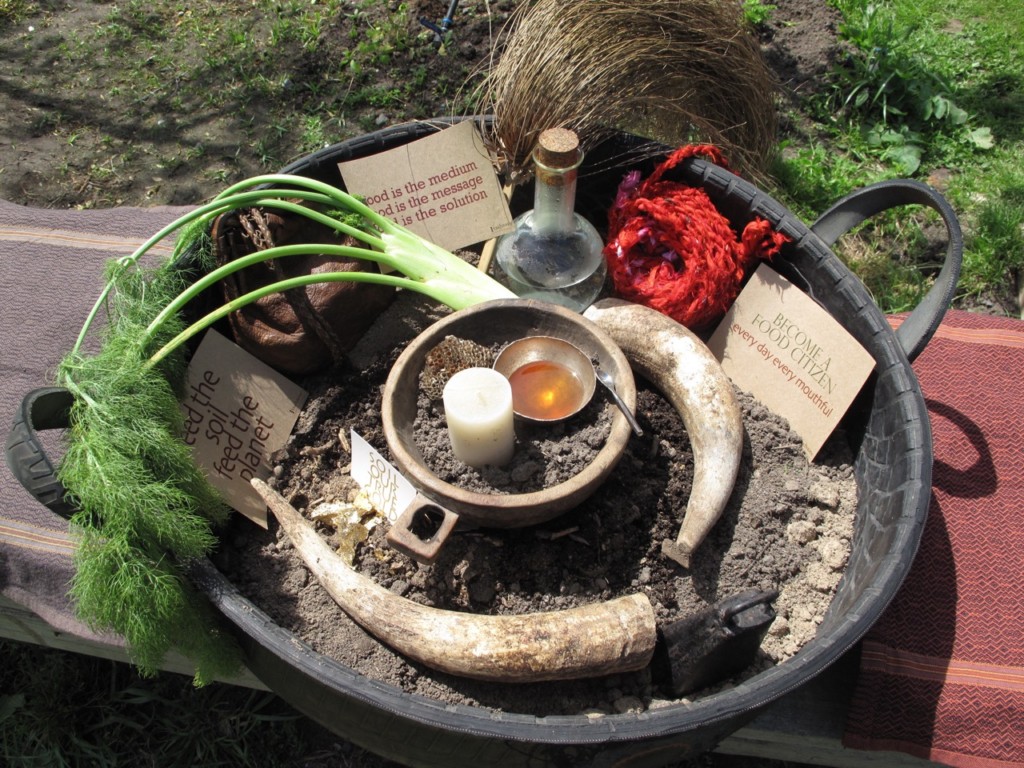 On 4 October 2016, a group of artists, scientists and academics came together at the Sustainability Institute for an afternoon of conversation and creative encounter, exploring how their combined perspectives and collaborations might help to enrich and enlarge the ways in which the Anthropocene is conceptualised and engaged with.

The dialogues, held at the Sustainability Institute, were convened by Prof. Oonsie Biggs and Dr. Rika Preiser of the CST, under the GRAID project to integrate resilience thinking into international development practice. Prof. Biggs is SARChI Chair in Social-Ecological Systems & Resilience at the CST, and Dr. Preiser is a senior researcher.

As Dr. Preiser noted, artists and scientists often use similar modes of inquiry in their work. Through connecting their different perspectives, there is expanded potential to think differently and create different stories of the future. 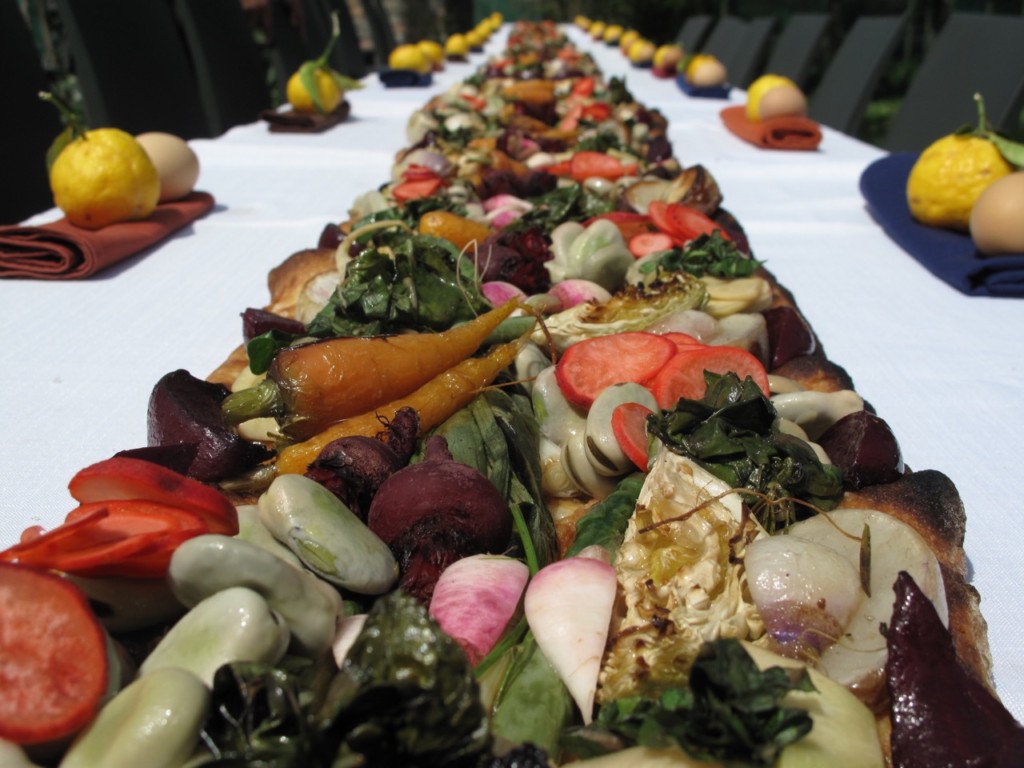 The first part of the encounter took place under the hot midday sun, with a contemporary food ritual lunch created by collaborative duo Miche Fabre Lewin and Dr. Flora Gathorne-Hardy, who recently completed a month-long artist/researcher ‘Living Cultures’ residency at the Sustainability Institute, visiting from the United Kingdom.

From food all things are born,

By food they live,

Toward food they move,

Into food they return. 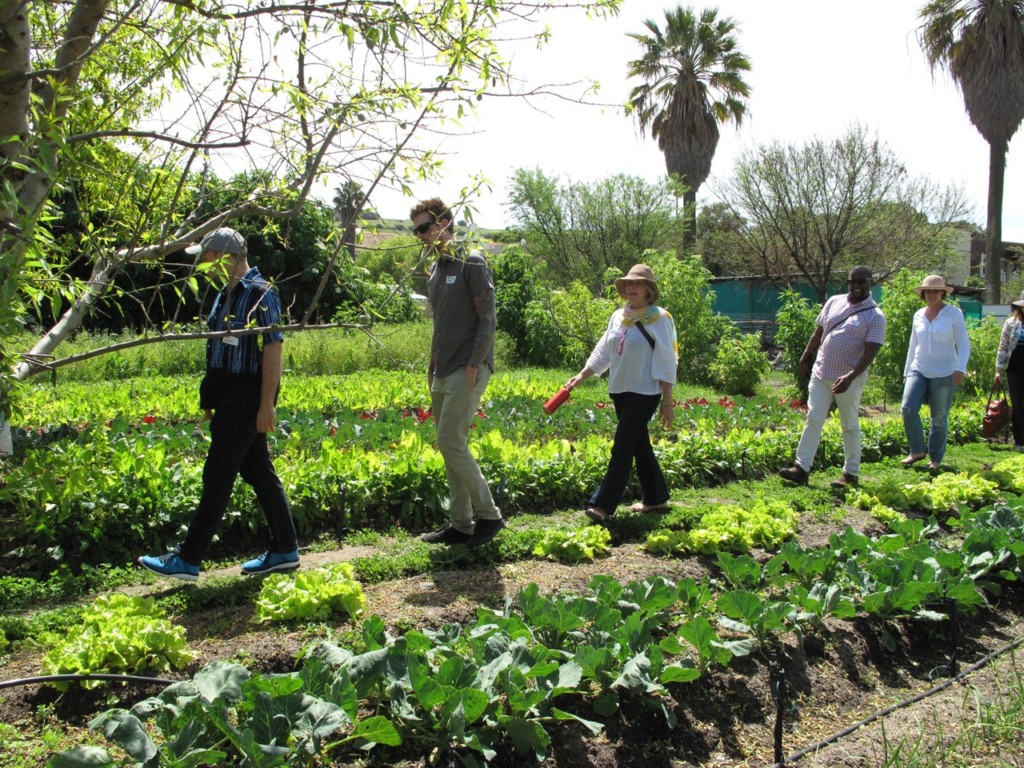 This was one of the invocations with which Fabre Lewin and Dr. Gathorne-Hardy invited the group to a sumptuous table set out in the SI gardens with colourful vegetables freshly plucked from the surrounding soil and prepared with simplicity and mindfulness.

As participants later reflected, the convivial gathering opened a quiet yet fertile space for them to slow down and experience food as connection to life: to soil and microbes, atoms and air, water and the bees, the tissues of our own organs, and of course each other — a feast for the imagination and all the senses. 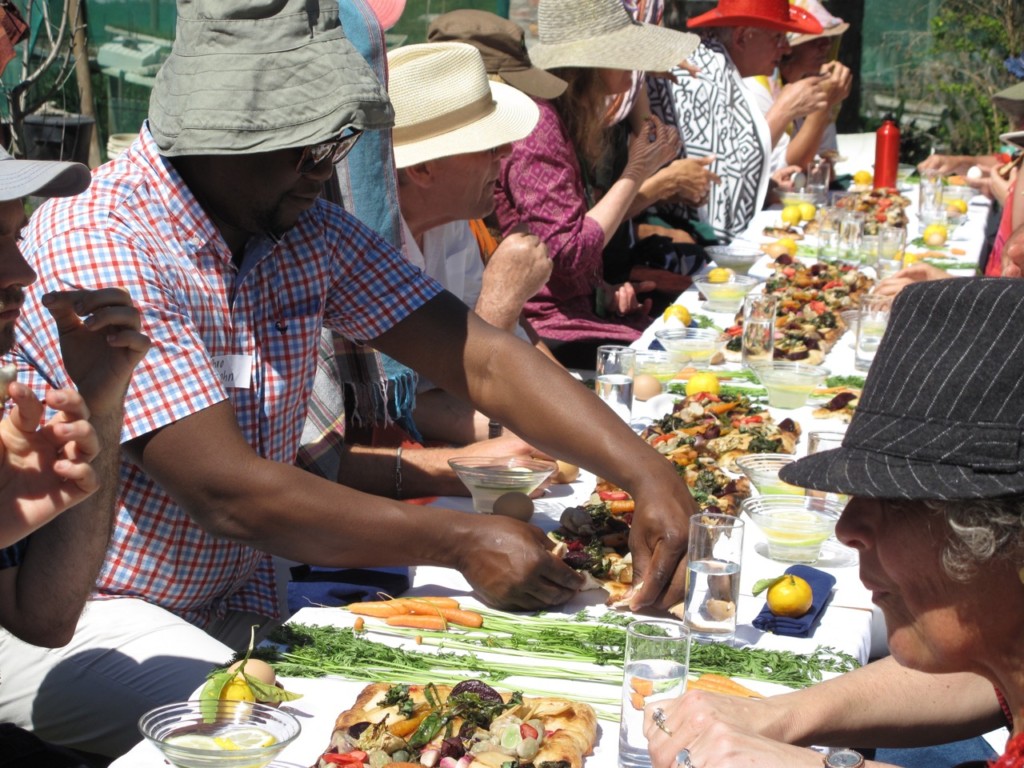 After lunch, six artists, several of whose work is being shown at the Sustainability Institute this month in an exhibition entitled ‘Re-imagine the Anthropocene’ presented their work and reflected on how they are grappling with the challenges of the Anthropocene through their artistic processes.

Acclaimed interdisciplinary artist Kai Lossgott showed his short film ‘small and common matters’ which comments on humanity’s controlling, interfering view of the world, through the presentation of footage and voice-overs of a flower dissection. ‘Because we cling to knowing in a particular way, it’s terrifying to think the world is not what we think it is,’ said Lossgott.

Next, photographer Gwendolyn Meyer introduced ‘Artefacts of the anthropocene,’ a series of photographs of intricate forms of kelp intertwined with bits of plastic and other waste that she found had washed ashore on the beach one day last summer after an unseasonal storm. Meyer was fascinated by the way these hybridized objects, forged in the churning sea, reflected the integration of man-made artefacts into nature’s forms and processes. ‘Imagine if you were a scientist in the future collecting these specimens of a new world,’ she mused.

Artist Sujay Sanan then introduced ‘kindred,’ a series of intricate wildlife artworks reflecting the interdependence of different animals, plants, fungi viruses and other life forms, depicted within the outlines of a whale, a tiger and other endangered species. ‘I am deeply interested in the environment around us as devoid of people,’ he said. ‘What other relationships are formed in nature — what symbiotic relationships, predator/prey feedback loops are constantly responding to and changing things, and how that’s shaping this beautiful land we live in and get to be part of.’ 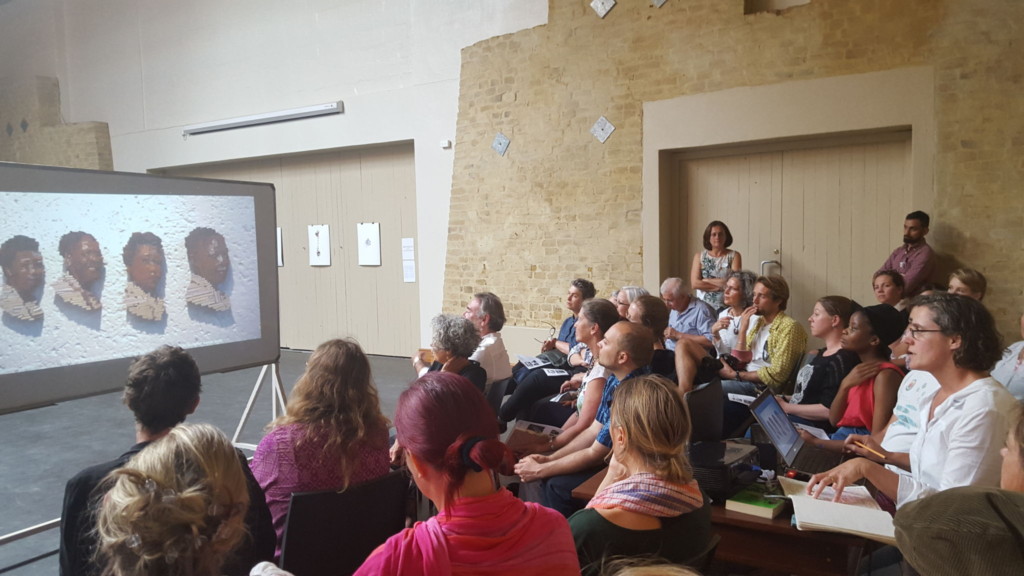 Next, Hannelie Coetzee spoke about the importance of collaboration and partnership in producing her site specific artworks, which explore a variety of ecological issues. For her 2015 work ‘Eland and Benko’, for example, she partnered with Wits University scientist Sally Archibald and the Cradle of Humankind Working on Fire team to explore the relationships between grazing, fire, land management and people, producing a controlled burn in the lowveld landscape, in the shape of a human child gently approaching an antelope, as part of a study of how fire affects the ecology. Her intention is that such ephemeral artworks, captured in video and photography, will continue to inspire people in tangible and lasting ways. ‘It was a 10 minute performance that took two years to plan,’ she says.

Finally, Flora Gathorne-Hardy and Miche Fabre Lewin, of Touchstone Collaborations presented on their spontaneous, intuitive style of collaboration, through which they combine a practice of art and research into food, culture and ecology. Working on a ‘thinking wall,’ the duo produced a joint sketch with charcoal on paper before the group, reflecting their spontaneous interpretations of the day. ‘I didn’t know what would happen,” said Miche, referring to the preparation for the lunch earlier in the day. ‘What we experience and work with all the time is getting to a place of surrendering to not knowing. For an artist in the Anthropocene — try not to know.’

Indeed, the profound uncertainty of living in the Anthropocene was an undercurrent in many of the conversations throughout the day. 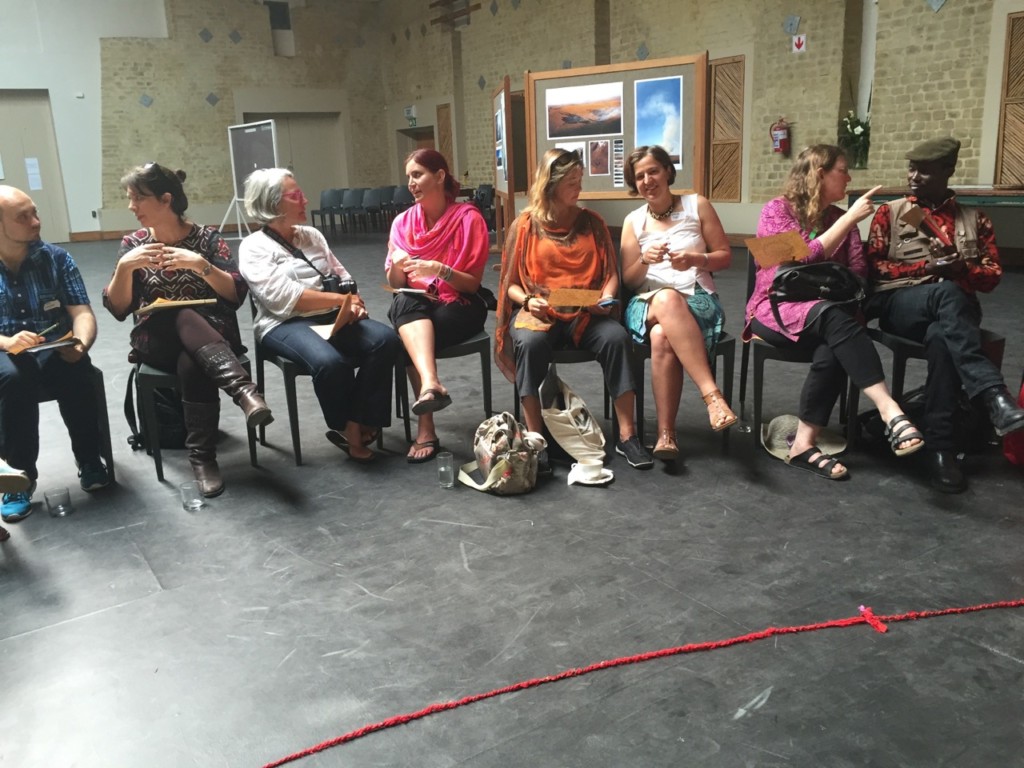 For the final part of the day, Prof. Johann Hattingh, Dean of the Faculty of Humanities at Stellenbosch University, delivered a thrilling ‘Anthropocene Dialogue’ lecture, describing the Anthropocene as a time and a conceptual orientation that is ‘terrifying to imagine but extremely exciting to live in.’

Terrifying, as we face such enormities all at once: technological acceleration at breakneck speed; the limitations of our knowledge and agency; the fallibility of modern ethics and values; the limitations of what we understand about our own minds; the urgency of social and ecological crises detonating everywhere. As participants noted, people and planet seem to be encountering new thresholds of complexity, and there is a simultaneous need for urgent action and deep reflection — and, as Prof. Hattingh described, a more complex understanding of time itself.

‘Visual art reminds us — you see aeons of time in evolution,” said Prof. Hattingh. ‘It invites us to situate ourselves differently in space and time — to think like mountains, but also to think like bacteria.’

The capacity also for ‘tentacular thinking’ — in the words of history of consciousness scholar Donna Haraway — offers potential for transcending old stories of human exceptionalism, and connecting to all of life as kin, Prof. Hattingh said. Drawing on the many-tentacled, subterranean goddesses of ancient mythology, Haraway proposes the term Chthulucene as a more generative descriptor of our era than the anthropocentrically-termed Anthropocene. For Haraway, the idea of the Chthulucene engenders a new form of generative intelligence and connected thinking, through which to engage in sym-poeisis — the symbiotic making of fertile and enlivening new futures.

It is the arrival of a new form of intelligence to imagine new ways of being, new stories, new questions, Prof. Hattingh said.
The link to Prof. Hattingh’s talk will be made available here shortly.