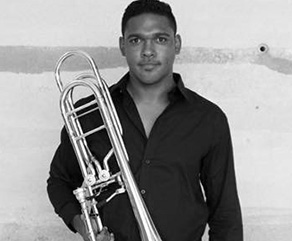 Lee-Roy Simpson’s formative music training started in the New Apostolic Church at the age of 12, on recorder. During the course of his secondary school education, he enrolled at the Beau Soleil Music Centre where studied trombone with Pamela Kierman and Nick Green and was principal trombonist in the Senior Symphonic Wind Band and Stage Band.
He initially studied commerce at Stellenbosch University, but changed to music after attending the 2005 Stellenbosch International Chamber Music Festival. On completion of the Advanced Certificate in Music Literacy, Lee-Roy enrolled for a BMus specialising in Chamber Music performance, which he completed in 2009. He continued with post graduate music studies and completed a BMus Hons in Repertoire Studies, specialising in tenor and bass trombone, and tuba in 2010.
During the course of his music studies he attended numerous music course and festivals and toured to Germany and Austria with the MIAGI orchestra in 2009.   He was also a member of the South African National Youth Orchestra and attended the Grahamstown International Jazz Festival in 2011 where he performed as a member of the North Sea Alumni Big Band.
As a chamber musician Lee-Roy has performed with many brass ensembles around the Western Cape on bass trombone and tuba. He is a member of the T-bone Trombone Quartet which won a category prize in the National Ensemble competition in both 2012 and 2014.  As an ad hoc trombonist Lee-Roy has played with many orchestras in South Africa, mainly on bass trombone and tuba. These include the University of Stellenbosch Symphony Orchestra and Symphonic Wind ensemble, The Namibian Symphony Orchestra, the Con Spirito Symphony Orchestra, WindWorx Symphonic Wind Ensemble, Cape Town Symphony and Kwazulu-Natal Philharmonic orchestras.
Lee-Roy enjoys teaching, and currently instructs brass students, on a part-time basis, at Bridgehouse (Franschoek), Bellville High School, Wynberg Boys’ Primary School and Kronendal Music Academy,  Hout Bay, a community music school. He was appointed as a part-time lecturer at Stellenbosch University in 2012 to teach trombone, euphonium and tuba undergraduate brass students and military bandsmen from the SANDF and SADC bands enrolled in the Certificate Programmes in Music Literacy at the satellite campus at the SA Army Band, Cape Town.