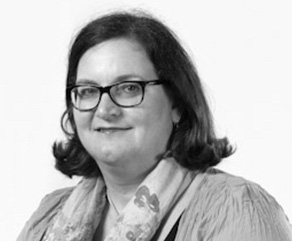 Pamela Kierman graduated with a BMus from the University of Port Elizabeth in 1983 and MMus from Stellenbosch University in 2009.  She worked extensively with Children’s Theatre and the RAD Ballet in her undergraduate years as arranger and accompanist. As French hornist she was a member of the Prince Alfred’s Guard Band and first horn of the former-CAPAB orchestra in Port Elizabeth. She taught brass in the band programme at Alexander Road High School from 1986-1987 until her departure for Cape Town where she took up the appointment of brass specialist at Hoërskool Voortrekker in July 1987. She participated in the upgrading of the SACC Band in Wynberg, now the South African Army Band, Cape Town, based at Youngsfield and in 1991 was appointed as brass teacher at Plumstead High School where she headed up the music department from 1994 – 1998. She taught in the Genesis Project, an outreach programme initiated by Sean Kierman and Michael Blake at the University of Cape Town and was a part-time brass lecturer at the South African College of Music, UCT.

In 1998, she was appointed as the Head of Brass at the Beau Soleil Music Centre where she remained until her appointment in the Music Department, Stellenbosch University in 2004. At the University she co-ordinates and lectures in the brass department, conducts the Stellenbosch University Symphonic Wind Ensemble and works extensively with the Rural Engagement Programme of the Certificate Programme.  As an ad hoc horn-player, she has performed with the Cape Sinfonia, the Cape Town Chamber Orchestra, Windworx Symphonic Wind Orchestra, Con Spirito Symphony Orchestra, the former CAPAB and the Namibian Symphony Orchestra. She has also been active as a chamber musician, performing in brass quintets and horn quartets throughout the Western Cape. She is a deputy-chair of the South African Horn Society, a committee member of the semi-professional symphonic wind ensemble, Windworx and past vice-president of the Western Cape branch of the South African Society of Music Teachers

Pamela has worked extensively in the sphere of community music and regularly adjudicates community band competitions, conducts workshops with ‘community brass’ and consults with community music organisations on matters of funding, proposal writing, sustainability, brass pedagogy etc.  She was chairperson of the Faculty of Arts and Social Sciences Community Interaction and Service-Learning Committee from 2012-2015 and co-ordinates the final year Service Learning module at SU. She is currently pursuing PhD studies at the Music Department, Stellenbosch University.